There is a brand-new update on the game server. Be on the lookout for HArms CQR assault rifle, SAP6 shotgun, improved technical stats for several weapon models, a new in-game notification system, improved flash bang mechanics, and much more.

Besides looking super luxe, the gold version of this weapon is distinguished by its narrower spread and higher-capacity drum that holds 60 bullets. And what's more, we even created a platinum skin! It can only be used on the gold version, and has the same stats.

And what kind of update would it be without achievements? Killing enemies with this weapon will get you commemorative badges.

SAP6 is a welcome addition to the vendors' legendary branch: now medics will have two legendary weapons to choose from in it, just like the other classes do. We have a feeling you're going to like the good RPM, high damage, and rapid reloading! Its main competition is MAG-7 and Fabarm STF 12 Compact, which both have similar RPM, accuracy, and clip size. 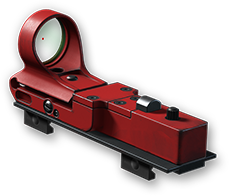 Medics who manage to destroy 10,000 and 25,000 enemies with SAP6 will earn themselves the corresponding achievements.

Several weapon models are getting their stats buffed in this update. If you shoved these models to the back of your arsenal and forgot about them, we suggest dusting them off and trying them out in battle again. You're going to like them, guaranteed! You can read more about all the changes in the related news post.

Icebreaker and Earth Shaker skins are now available for standard versions of weapons. You can get them by choosing your desired gun in the arsenal—the skin menu will be shown in the lower right corner.

Every day, Warface players get event notifications in the game—for example, about rewards for reaching a new rank, when time is running out to get limited-time equipment, and so on. Almost all these notifications appear in pop-up windows that cover the game interface and require action on the player's part.

As part of improving the user interface, we added a special inbox for game notifications that acts as a separate menu. This innovation will relocate pop-ups so they don't clutter the main screen, and will store various in-game messages in one convenient place until you have time to read them, after which they will be removed.

In this update, we changed and improved how flash bangs work, which will encourage more strategic gameplay with flash bangs and will take their use to a new, more interesting level. You can read more about the changes in this special article.

We made some changes to the connection quality indicator. The indicator bar layout was overdue for an improvement and often did not reflect the real situation, causing you to make incorrect assumptions about the impact of a particular ping value on gameplay. You can read more about the changes in the spoiler text.

First, we want to point out that hitting a moving opponent first and foremost depends on the character movement mechanics, and only then on connection quality. If your opponent moves exclusively over flat surfaces and doesn't change elevations, then even a really high ping won't have a noticeable effect on gameplay. This has been confirmed by research done by both the development team and the players themselves (Monter, for example, has several videos that touch on this). However, the situation becomes more complex when your opponent starts interacting with objects — for example, climbing over obstacles or jumping from one object to another — and this may result in rare but possible inconsistencies between the character's actual and visible location, even with the lowest ping possible.

The development team has previously made attempts to refine movement mechanics, but so far there have been no tangible results. At the moment, we are working on a third version of the updated system, which we hope to be able to unveil in the future. This is not related to the ping indicator, and should improve the situation described above.

The change we're making to the indicator in this update is designed to minimize the amount of negativity in the game that is based on incorrect assumptions about the impact of ping on gameplay, and is only one of the steps we're taking to improve how users interact with the game and with each other.

In the new model, five full bars indicates a ping of no more than 65 ms, which is the norm for modern games. Now the number of bars on the indicator more accurately represents how much the state of your network connection impacts the quality of the game.

Fully-damaged items can no longer be deleted from your inventory. Warblog - March 13th
A new seasonal update is on its way. Meanwhile we have launched several activities and a special Ranked Matches season that offers exceptional rewards!
2022-03-13 17:35:25