Spend your time wisely: the current Ranked Matches season will last till the 19th of May!

By reaching the 15th league, you will be able to extend your arsenal with a sleek and no less powerful gun Walther P99 «Impulse»! 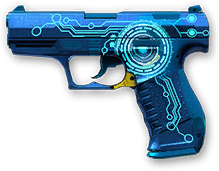 Coming Soon: The Escape from Anubis Raid
What happened to the Warface squad after the Anubis raid? Were they able to reach the evacuation zone? You’re about to find out!
2018-09-19 08:31:50