Even more rewards in ranked matches!

A new ranked season's just recently started, and many of you have joined the race. Among a multitude of other rewards like the unique stripe, consumables and alike, you can also land a permanent Elite Desert Eagle for reaching the first league! 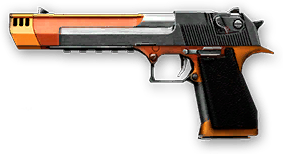 This pistol's one of the hardest hitting sidearms in the game, reaching up to 130 damage per shot. Take a moment to compare it to its regular version. The Elite sibling comes with an increased effective range and magazine capacity, making it one of the best go-to sidearms for casual and competitive players alike. Join the new ranked season and climb the ladder!

Want to learn more about this season? Read all about it in our article! "Icebreakers" and booster sales rocking the shop!
It's time to gear up and finally get that rank you've been longing for, with the time-tested Icebreakers and plentiful boosters at a good price!
2019-02-19 08:50:20