A rifle has to be reliable at all times, but let's say you get knocked down or run out of ammo and there's no time to reload? That's where secondaries come into play. And on the off-chance you plan to survive the entire round, take on multiple foes or make amazing plays, you can't go wrong with some smoke screen! Smoke 'nades are highly useful when it comes to rotating to a different enry point, deny vision to enemy marksmen or lend aid to some friendlies under heavy fire.

War isn't about the biggest gun and the fastest draw — it tends to get tricky! This "Nuclear" set will help you ambush your enemy and pull amazing escapes when there's no way out!

More about the contents 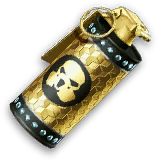 "Nuclear" M1911A1. This pistol inherits the devilish green glow of its "Nuclear" siblings, visible even in the dark. While its looks are enough to win the hearts of many, it boasts a bunch of other perks: high damage and effective range values make it an awesome secondary. On the downside, you're limited to only 7 rounds, but you can bet that's gonna be enough to bring them down — just make sure you land the shots!

Golden smoke grenades. Just gotta roll in style, man, am I right? Can't do it like a normie, regular smokes are for privates! Highlight your status in the noble golden colors with unique explosion visuals that leaves nothing but a sense of pride and accomplishment.

Mega VIP Booster. This consumable helps you rank up (180% XP boost), get the coveted Arsenal items (130% VP boost) and the WF money to keep them well-maintained (165% WF$ boost) considerably faster. No such thing as too much! PvE campaign in Warface: Global Operations
Take up a mission to a mysterious ghost town in the Afghan hinterland and discover the reasons why the local population flees the region and civilian aircraft disappear in the area.
2020-09-18 07:36:41